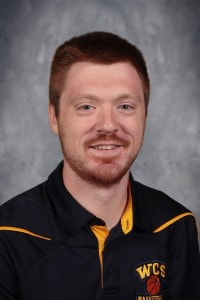 Benjamin Garrett is entering his fourth year teaching Middle School Math at Westside Catholic. Currently, he teaches 6th and 7th grade math, Pre Algebra,  Algebra, as  well as a variety of extra curricular technology classes. Mr. Garrett received his bachelors degree in Elementary Education, with a focus in Middle School Math from the University of Southern Indiana. He is currently working on his masters in Education Administration at USI. Westside Catholic has felt very much like home to Mr. Garrett since he was a student here from kindergarten through 8th grade.
​
​Outside of school, he enjoys spending time with his wife, Tori, son, Everrett, daughter, Lettie, and three dogs. Mr. Garrett also enjoys serving others through his role as the Clubhouse Manager for the Evansville Otters, where he has worked since the summer of 2010. ​​
Go Back